Glendale, CA – Earlier this week, a delegation comprised of CA State Assemblymembers, Los Angeles City Councilmembers, their staff, and representatives from the Armenian National Committee of America – Western Region returned home from a two-day working visit to the Nagorno Karabakh Republic. During the visit, the delegation received a firsthand look at a region that is vital to both American and international security concerns and aided in reaffirming their longstanding commitment in support of NKR.

The delegation participated in high-level meetings and briefings with NKR leaders, including NKR President Bako Sahakian and several cabinet members, Speaker of the National Assembly Ashot Ghoulian, and Members of the National Assembly. The meetings allowed for the two sides to discuss how they may strengthen relations between the State of California and Artsakh while also giving opportunity for US officials to gain insight on issues of diplomacy, security, trade, and Azerbaijan’s refusal to cooperate on reaching a peace agreement despite continuous efforts placed forth by NKR.

The evening was highlighted by a Presidential reception for the CA delegation where the children of Artsakh performed heartwarming musical selections for the group. Coincidentally during the CA delegation visit, other foreign delegations were also in NKR, including Canadian Parliament Member Stephane Dion, British House of Lords member Baroness Caroline Cox who was accompanied by ANCA-ER Executive Director Michelle Hagopian, and others.

After the formal meetings, the NKR National Assembly held a special session for the delegation during which the CA State Delegation along with the ANCA-WR were given the opportunity to address the Assembly from the floor, all reiterating their commitment and support to the Government of the Nagorno Karabakh Republic and its people.

In their remarks, Assemblymember Brown noted that the Armenian People and African-American People share a painful common history of Genocide, stating, “On behalf of my district, my constituents, and my people I promise to do everything in my power to make your voice and needs heard. I will also personally write to the President of the United States conveying and explaining your concerns and the concerns in the region,” while Assemblymember Achadjian conveyed his hopeful assertion that future delegations will be able to freely fly into the new Stepanakert airport without fear of being shot down by the Azeri government. Assemblymember Nazarian announced that he is a son of Shushi who is now a proud elected official in California still committed to his roots, while Assemblymember Wilk described his indignation at realizing that online posts from the region are identified as being from Azerbaijan, reaffirming his commitment to the proper recognition of NKR.

“For me personally, the pride with which I was able to address the Parliament and to assure its members that the ANCA will continue to do everything within its power to ensure the recognition and security of Artsakh was absolutely immeasurable,” stated ANCA-WR Chair Nora Hovsepian.

This was all topped off with a celebratory visit to the City of Shushi, where Los Angeles Councilmembers Paul Krekorian and Bob Blumenfield along with the rest of the delegation participated in an emotional ribbon cutting ceremony and celebration of the Los Angeles-Shushi Friendship Park followed by a public meeting with the Mayor of Shushi, Artsvik Sarksyan.

“While the trip to Artsakh was significant for me in many ways, it was especially extraordinary for my colleagues who joined us despite threats from the Azerbaijan government warning them against traveling there. That could not stop members of the state legislature and City Council from visiting Artsakh and working to strengthen our ties toward a deeper level of economic and social cooperation between our two countries,” stated LA City Councilmember Paul Krekorian.

Councilmember Blumenfield also addressed the gathering, noting the fact that both Shushi and Los Angeles are cities of angels and expressing appreciation for all he had learned on the trip.

Prior to their departure from NKR, the delegation requested and received an NKR visa stamp in their passports with full knowledge that this would result in their names being placed on Azerbaijan’s persona non grata list in direct defiance of threatening letters they had received from the Azeri Consul General before the trip, following the lead of CA State Assembly Speaker John Perez, and noting that being on the blacklist was a badge of honor for them.

Since the visit, Azerbaijan’s media outlets have falsely reported that CA Assembly Speaker, John Perez refused to visit NKR due to Azeri pressure, when in reality, the Speaker never intended to visit NKR because of schedule conflicts. Speaker Perez responded to the Azeri threats and false accusation through a letter to the Government of Azerbaijan dated Wednesday, September 25, 2013 in which he noted “I must not let go unanswered any attempt to dictate the travel plans of duly elected representatives of the State of California. Further, raising the threat of making California elected officials persona non grata in your country hardly seems conducive to building a strong and mutually beneficial relationship. Please be advised that if the Republic of Azerbaijan does, in fact, add any California official to the list of persona non grata you should immediately add my name as well.”

During a productive meeting in Stepanakert between the ANCA-WR members and Primate of the Diocese of NKR, Archbishop Barkev Martirosyan, the Archbishop enthusiastically accepted the invitation of the ANCA-WR to receive the Khrimian Hayrig Award at its Annual Gala Banquet on November 30, 2013, in Hollywood, California.

The two day visit to NKR followed a 5 day working visit to the Republic of Armenia. The delegation also included Assemblymember Nazarian’s Chief of Staff Dan Savage, Councilmember Krekorian’s Chief of Staff Areen Ibranossian, Communications Director Jeremy Oberstein and Director of Planning and Land Usage Karo Torossian, ANCA-WR Chair Nora Hovsepian, and ANCA-WR Executive Director Elen Asatryan. The trip was hosted by the Governments of Armenia and NKR and facilitated by the Consul General of Los Angeles in cooperation with the CA State Assembly, LA City Council and the Armenian National Committee of America – Western Region.

The Armenian National Committee of America-Western Region is the largest and most influential Armenian American grassroots advocacy organization in the Western United States. Working in coordination with a network of offices, chapters, and supporters throughout the Western United States and affiliated organizations around the country, the ANCA-WR advances the concerns of the Armenian American community on a broad range of issues.  Read about the trip to Armenia by clicking here. 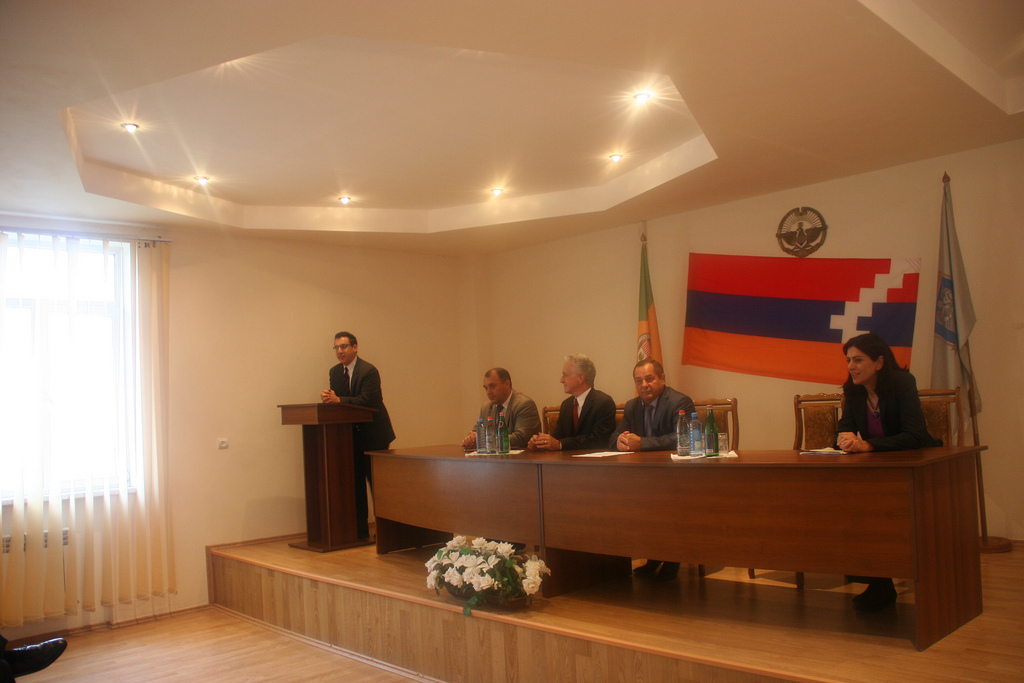