Our third week of the 2020 ANCA-WR summer internship program began on Monday, June 22 with a virtual meeting with Sevag Belian and Aram Balian, the executive directors of the Armenian National Committee of Canada and the ANCA Eastern Region respectively. Both speakers discussed their experiences working in the respective regions, giving the interns an insight on the different challenges and opportunities in advocating for the Armenian Cause. While Armenian National Committees worldwide essentially have the same set of goals, political and demographic factors can influence the means utilized to reach them. We learned about the efforts of how each office engages members of the community as well as how their methods of advocacy differ due to a number of circumstances. Both the ANCC and ANCA-ER are successful in advancing the Armenian Cause, and it was valuable to get a broader perspective on the political power of the ANCs in North America. 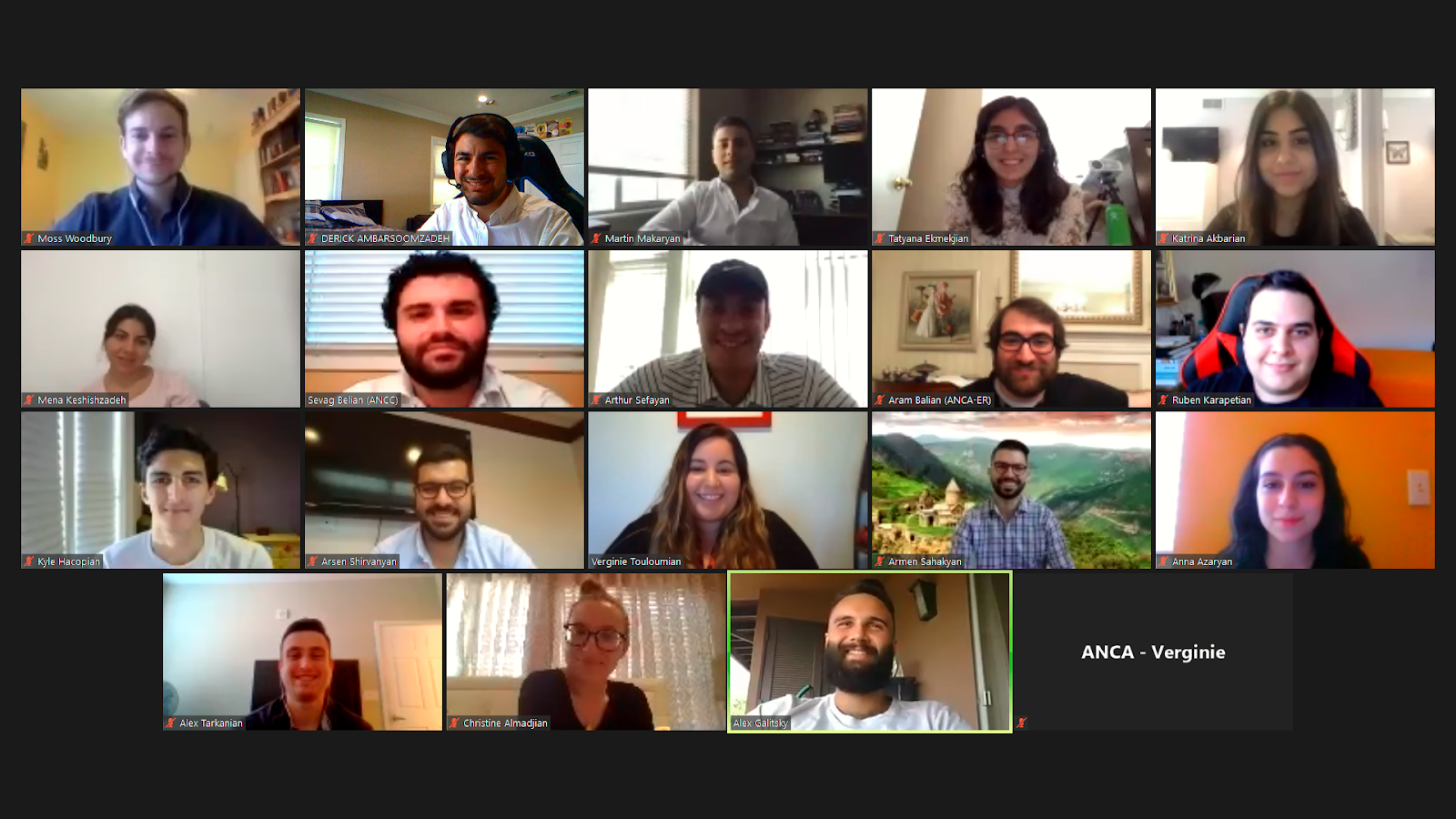 Later that day, we briefly met with the ANCA-WR Board of Directors. All the interns had a chance to introduce themselves. Each intern spoke on their academic and professional ambitions, why we chose to participate in the internship, and the project they have undertaken during the internship.  It was inspiring to see how long many board members have been working with this organization, as well as how accomplished they were in their lives outside of the organization.

On Tuesday, William Bairamian spoke with our internship class regarding his experience working with the Armenian community. After working at the ANCA Western Region and founding The Armenite, he decided to move to Armenia to continue his efforts there. During his time there, he witnessed the Electric Yerevan Protests and the Velvet Revolution, two major political developments in the country. He advised us to examine the sources we get news from and be mindful of the potential biases the outlets may have, and shared with us his self-proclaimed unorthodox views on Armenian politics. This lecture helped provide a differing perspective on Armenian politics and living in Armenia that many of us otherwise would not have heard.

On Wednesday, rather than hear from a guest lecturer, we had a trivia game testing our knowledge on American politics and civics. This was Moss’ opportunity to redeem himself from last week’s Armenian trivia, and he seized it unequivocally, soaring to the top of the leaderboard right off the bat and staying there for the entire game. 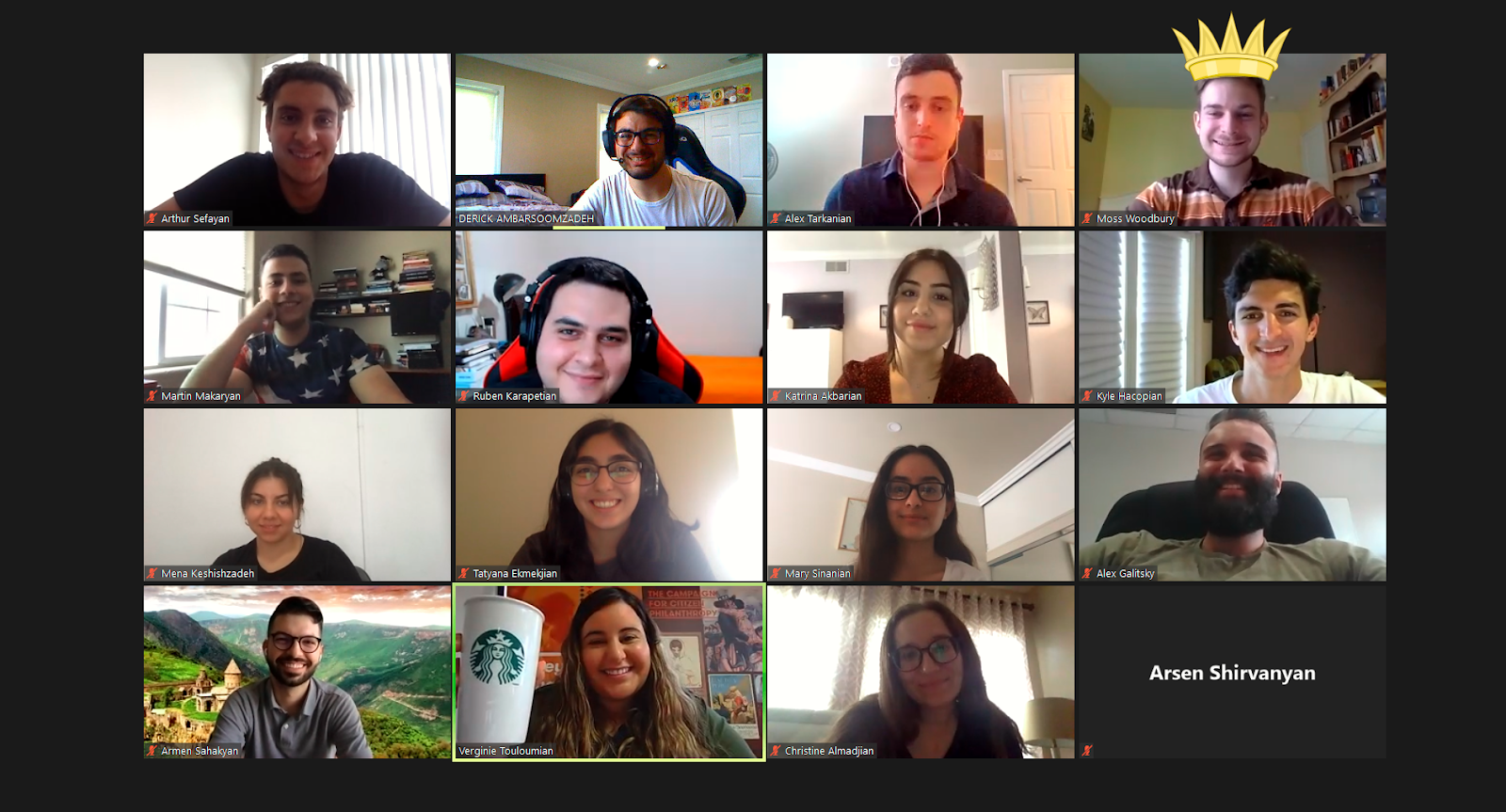 On Thursday, we met with Roxanne Makasdjian, co-founder and executive director of the Genocide Education Project and produier of the 1991 documentary film Charles Garry: Streetfighter in the Courtroom. Her discussions on the Genocide Education Project provided us with an understanding of the efforts to include the Armenian Genocide in public school curricula, and the steps being taken to ensure teacher training and capacity development. The bulk of our discussion, however, pertained to her documentary. Interns had a chance to watch the film prior to this meeting, which outlined the career of an Armenian-American civil rights attorney Garabed Garabedian, better known as Charles Garry. She created the documentary with the intent of outlining parallels between the issues faced by Armenians and other minorities in America, while also telling the story of a unique lawyer who resonated with the public and brought political questions into the courtroom. The documentary is particularly significant right now, with the ongoing Black Lives Matter protests calling for similar reform that Garry was fighting for in the courtroom decades ago.

On Friday, I was invited to visit the ANCA-Glendale office and work from there. My project for this internship involves working alongside ANCA’s Glendale chapter to keep up to date on the activities of our local institutions, and this week I received an assignment to organize a virtual town hall forum. In the Glendale office, I worked alongside my mentor, Hasmik Burushyan, to decide on a topic for the forum and establish a groundwork to execute the project. Being located in the Glendale Youth Center, a number of other Glendale-based Armenian organizations conduct their business from the same building; I didn’t even know this building existed, so it was amazing to see all the work our community does in one place.

As for the general meeting with all the interns, Friday, as always, was our check-in session wherein we all provide updates on our personal projects and discuss the lecturers from the week. It’s always interesting to hear about the other interns’ work, and it shows how multifaceted the ANCA is with all the different sorts of projects it conducts at the same time. We concluded the session by talking about a number of ways Armenians have taken action against genocide denial, and watched videos showcasing that.

As was the case with the weeks preceding it, week 3 has further fueled my excitement for the future of this internship, and I am looking forward to the weeks to come.