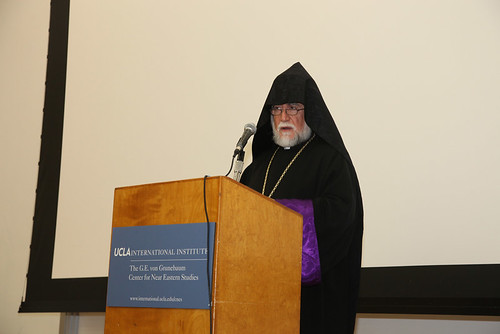 His Holiness Aram gave a lecture at UCLA, where the hall was filled to its maximum capacity.  People from various different backgrounds were in attendance representing different cultures, religions and ideologies; however, the one common interest in the room was, eagerness to see the man who led the Middle Eastern Council of Churches for almost 14 years. With devotion worthy of a religious leader committed to the ideas of peace, brotherhood and forgiveness, he oversaw unprecedented cooperation and balance between different Churches and their leaders.

One of the greatest surprises for me was his realistic approach to world politics in general and to the Middle East’s current situation in particular. The Utopian idea of world peace was not what The Catholicos was working tirelessly for, but a much more achievable, and thus more important objective – attaining mutual respect and tolerance in the region, where different cultures and religious groups will not clash as often as they do now and will be able to peacefully coexist. He believed that the understanding and acceptance of each others’ differences will create the necessary preconditions leading to cooperation grounded on the idea of comradeship. The Catholicos was a strong supporter of the idea of secularism. He saw the division of Religion and State as one of the most important prerequisites for attaining democracy and harmony in the Middle East. He was skeptical about the direction Arab Springs were taking, stating that it is still too soon to make predictions as to what the condition of repressed Christian communities will be in the new regimes.

While praising Lebanon’s Government and other similar democracies that Christians enjoy, he commented on the ineffectiveness of using its model in other states. He emphasized the differences in deeply embedded cultural, social and religious norms, and traditions, as well as the current demographic picture shaping the Middle Eastern countries, pointing out that one must approach each of them in a unique way. A successful model in one country cannot necessarily be successfully applied to the other. Moreover, he refused to comment on the Palestine-Israel conflict, demonstrating his brilliant diplomatic skills which indeed make him one of the most influential religious leaders in what can be said to be the most turbulent and religiously intolerant region of the world.  Finally, he stressed the need to give moral and spiritual support to the repressed Christians in that region, who are caught between the “Muslim religious-centrism and Jewish ethnocentrism”, concluding with the statement that the unification of Christians is the key to the balance and prosperity of the Middle East.

The question/Answer segment quite interesting.  The Catholicos captivated and dominated the audience with just his voice, his charisma and with the undeniable spiritual power that he possessed. I left the meeting invigorated, empowered, and with an indescribable sense of pride that I share the name – “Armenian”- with this great individual.