Asatryan: The Next 11 Months

Fueled by our collective successes and triumphs last year, we’ve hit the ground running in 2015. The strides to our future victories are set in motion, in full force.   A force that I assure you, is unrelenting and unyielding in the face of serial Genocide deniers, history falsifiers and lobbyists serving as paid foreign agents for Azerbaijan and Turkey. 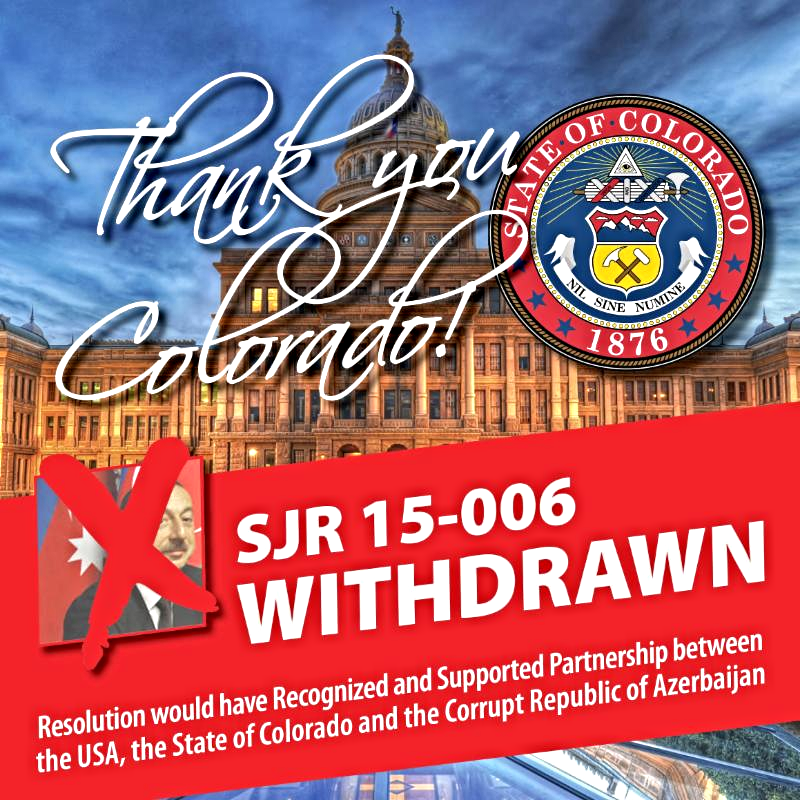 Just a couple of weeks ago, thanks to our grassroots in Colorado, we were able to have the Colorado State Senate withdraw a pro-Azeri resolution packed with blatant distortions –  just moments before its scheduled vote. (Here is the link to the full story).  Yesterday, thanks to the efforts of our Pasadena Chapter and our Education Committee the Pasadena City College for the first time passed a resolution recognizing the Armenian Genocide and committing to educate its faculty, students, and public at large through campus wide events about the atrocities that took place in 1915.

We know that this is just the beginning of our future successes.

We also know that we face an uphill battle, in the months ahead, against the millions of dollars that the Turkish and Azeri lobbieswill be flooding America with to deny the Armenian Genocide  andwhat is happening on the borders of Artsakh today.

It won’t be easy, but we know we have something the foreign agents of Azerbaijan and Turkey will never have…You – Our grassroots.

On the eve of the Armenian Genocide Centennial, which marks what may be the most momentous year for collective action from Armenians worldwide, we have been ramping up our grassroots programs, all of which further our mission to educate, motivate, and activate.

Here are the highlights:

“March for Justice” on April 24th – We are among the 19 organizations working collectively with the Armenian Genocide Centennial Committee.  The slogan this year is “We Remember. We Demand.”  This united front is rallying our community’s active participation and ask that you mark your calendars and help spread the word as far and wide as possible.

Our recently launched initiative, “America We Thank You (AWTY): An Armenian Tribute to Near East Relief” is a trailblazer in the arena of educating Armenians and non-Armenians alike about the unprecedented generosity and humanitarian support the Near East Relief (NER) garnered from the American citizenry from 1915-1930.We have partnered with four-time regional Emmy Award-winner editor and producer Bared Maronian for the creation of a documentary film that will be circulated throughout schools, cities, and community based and government institutions nation-wide –  while also working hand in hand with our local chapters to host community forums and exhibits to ensure that students, teachers and the community at large are well-informed about this proud chapter in America’s history. (Learn more at AmericaWeThankYou.org)

Armed with the momentum from last year’s victories through resolutions passed by the Los Angeles Community Colleges District and Glendale Community College, our local chapters across the Western United States – from Arizona to Colorado, California to Nevada are working around the clock to ensure that our cities, educational institutions, and states adopt measures to designate April 2015 as a Month of Commemoration of the Armenian Genocide and accordingly inform and educate their citizenry, organize educational workshops about this dark chapter of history.

Preparations for this year’s “Sacramento Advocacy Day,” to be held on Monday, April 20, are in full swing.  We are calling on you to join us and hundreds of community members at California’s State Capitol to commemorate the Genocide’s Centennial and meet with your state representatives face to face to advocate for issues of concern and importance to our common cause. Visit ANCAWR.org/AdvocacyDay today to learn more and register online.

To further strengthen our reach and activities beyond California, we brought on board Denver-based educator and activist Simon Maghakyan. As our Community Development Coordinator, Simon is charged with organizing Armenian-Americans across the Western United States to amplify their collective voice in their respective states.  We already have mini advocacy days and town hall meetings scheduled in Houston on March 1st, Las Vegas on March 8th, and Phonenix on March 14th.

Because we recognize that a community that votes, gets their voice heard on legislation that matters, we’ve been ramping up our Hye Votes initiative.  It has one mission and one mission only:  to increase the number of Armenian American registered voters and get them out to the polls on Election Day.

In just two short years, I am proud to note that we have been able to register over 7,000 Armenians to vote in Glendale, Hollywood, West Valley, Burbank, Montebello, and Sacramento. In the coming months you will witness the expansion of the program in North Hollywood, Sunland, Tujunga, Studio City, the greater San Fernando Valley, as well as communities outside of California. (Learn more and register online at hyevotes.org)

Crucial to our continued success of course, is educating and training the next generation of leaders and activists by providing them with hands-on and real-world experience. To that end, we have expanded our regional internship program currently in its ninth year, which has trained hundreds of local youth and will continue to sponsor local students to participate in the ANCA Leo Sarkisian Internship and the ANCA Capitol Gateway programs in Washington D.C.

We are also working vigorously with the ANCA in Washington, DC to educate more and more Members of Congress on issues related to the Armenian Genocide, Artsakh, Javakh, U.S. aid to Armenia, the need to bolster the U.S.-Armenia economic relationship, among other key issues.  This work is being achieved by the ANCA family thanks to thousands of grassroots activists – from Utah to Idaho – who believe that the Armenian Cause is worth fighting for in the Halls of the U.S. Congress.

Additionally, we are building on the successes of our Education Committee’s accomplishments to ensure a bright future for Armenian-American youth. We have expanded and are continuing to grow our Path to College program launched in 2007 to educate high school students and their parents on how to successfully graduate high school, apply to and pay for college.

And finally, we will have the privilege of honoring YOU and community members and organizations alike for going above and beyond the call of duty for the advancement of the Armenian Cause as we celebrate our collective successes during our Annual Gala slated for October 25, 2015 at the Hyatt Regency Century Plaza. The highly anticipated Grassroots Conference scheduled for October 23-24 will precede this year’s Gala. Stay tuned for details!

We know we have a lot planned and all of this takes two things:  manpower and money.

So please take 2 minutes, right now, and lend your much needed support to strengthen our advocacy, community outreach, civic engagement, youth, and development programs by making a monthly or general secure online donation of $500, $250, $100, $20 or $5 or whatever you can afford.  No amount is too little or too large.

We have an action packed year ahead of us and are blessed to stand on the shoulders of activists who preceded us, activists who paved the way for this moment. Our Moment, the success of which rests in the collective hands of Activists like You.

Together, let’s use the next 11 months to amplify our collective voice. Working smart, working with dedication, working together – we can move mountains and defeat those who seek to deny us justice and freedom.

Like the heroes of the battles of Sardarabad, Karakilisa and Bash Abaran – the ANCA-WR urges you to unite with us this year to fight the good fight for the Armenian Cause.

Please join us today in this worthy battle by donating now.

With Gratitude and In Common Cause,