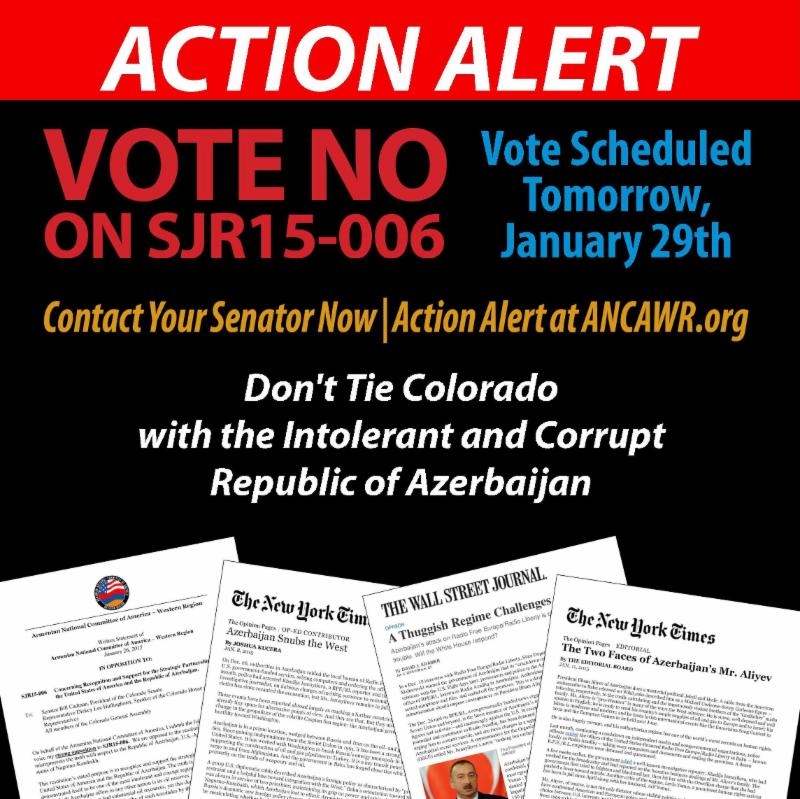 SJR15-006 was introduced on Friday, January 23rd – and appears to be fast-tracked by the Colorado Senate, which means a full Senate vote can come as early as Thursday, January 29th.

SJR15-006, a profoundly biased and factually incorrect resolution, references independent Artsakh as part of Azerbaijan, remains silent on that country’s ongoing attacks against neighboring Armenia and Artsakh and, offers Colorado’s support at a time when President Aliyev has forced closed the US-funded Radio Free Europe / Radio Liberty offices in Baku.

You can help stop Azerbaijani dictator Ilham Aliyev’s attempt to secure Colorado’s support for his repressive regime by opposing SJR15-006, currently under consideration in our State Senate.

Write to State Senator Larry Crowder, the Senator who has introduced SJR15-006 and key state legislators NOW and urge that they VOTE NO on SJR15-006.

Call State Senator Larry Crowder and urge him to stop consideration of this flawed bill.  He can be reached at: 303-866-4875

Here is a phone script to help you get started.
[Your call will be answered by a receptionist, who will most likely simply ask you to leave a message. Share thoughts along these lines.]  If no one answers, do leave a voice mail.Hello. I’m [NAME], from [CITY, STATE].

I am calling to alert you to vote NO on SJR15-006 when it comes before the Colorado legislature.

SJR15-006 is being advanced by the President of Azerbaijan, a corrupt and undemocratic country, to interfere with our democratic system here in Colorado.

I’m talking about Ilham Aliyev, who is trying to get our legislature to support his repressive regime even as he is closing down U.S. news offices in his country.

This is brazen foreign interference. Corrupt dictators don’t get a vote in Colorado and they certainly don’t have a right to tell us what to do.

I am outraged by this shameful effort to hijack our State Senate. Please stand up against meddling by foreign bullies who neither respect our rights nor share our values.

Thank you for your consideration of my concerns. I would appreciate hearing about any votes or other actions you take on this matter.