The Fall 2021 interns began their program with a group orientation on the first week via Zoom. We met the ANCA-WR staff Alex Galitsky, Armen Sahakyan, Edward Barsoumian, and Ruben Karapetian who pitched us their projects and what each intern would expect if assigned to their respective groups. On September 21 interns were given their first lecture by Nora Hovsepian, a chairperson of the ANCA Western Region for over a decade. At the core of the ANCA’s mission is to further the Hye Tahd (Armenian cause) by connecting with state officials and advocating support by bringing awareness to Armenian issues on the federal, state, and local levels. Several generations of Armenian-Americans have been part of the Hye Tahd and due to their efforts the US Senate and Congress recognized the Armenian genocide in 2019. This was followed by the recognition of the genocide in 2021 by President Joseph Biden which can be marked as one of the ANCA’s greatest achievements. Nora Hovsepian went onto explain how the ANCA’s current focus is to get Turkey to recognize the Armenian genocide and in time pay reparations to the Armenian community that was effected through monetary payments and the return of Armenian ancestral lands.

Interns were exposed to the four different types of Armenian genocide denial employed by Turkey and Azerbaijan who continue to operate with genocidal intent toward Armenia. The methods used by denialists ranged from outright denial that any killings took place to a more benign version by claiming many Armenians perished but due to war-time conditions. Interns were taught both defensive and offensive methods in order to counter such denialist rhetoric. The offensive method would involve using academic and primary sources, employing the use of social media, and spreading awareness of the genocide through the arts such as films. If using the defensive approach, one should ask denialists questions such as why there are no more Armenians left on their ancestral lands. The lecture ended with a discussion around the war on Artsakh by Azerbaijan last year which has left Armenians with the dilemma of abandoning Artsakh to save the core Republic of Armenia or trying to salvage what we can.

Starting off our third week, interns met with Tereza Yerimyan, Director of Government Affairs at the ANCA, who gave us more insight into the organization’s lobbying efforts. Tereza explained that now with the ANCA’s goal of American recognition of the genocide out of the way, their efforts focus on education about the genocide and legal work to make the case for reparations. In addition, the ANCA is currently working on stopping arms sales to Azerbaijan and enforcing sanctions on Turkey. In response to a question, Tereza stated that the biggest accomplishment by the ANCA besides US recognition of the genocide was getting the US to send aid to Artsakh despite the fact it does not recognize it as an independent sovereign political entity. 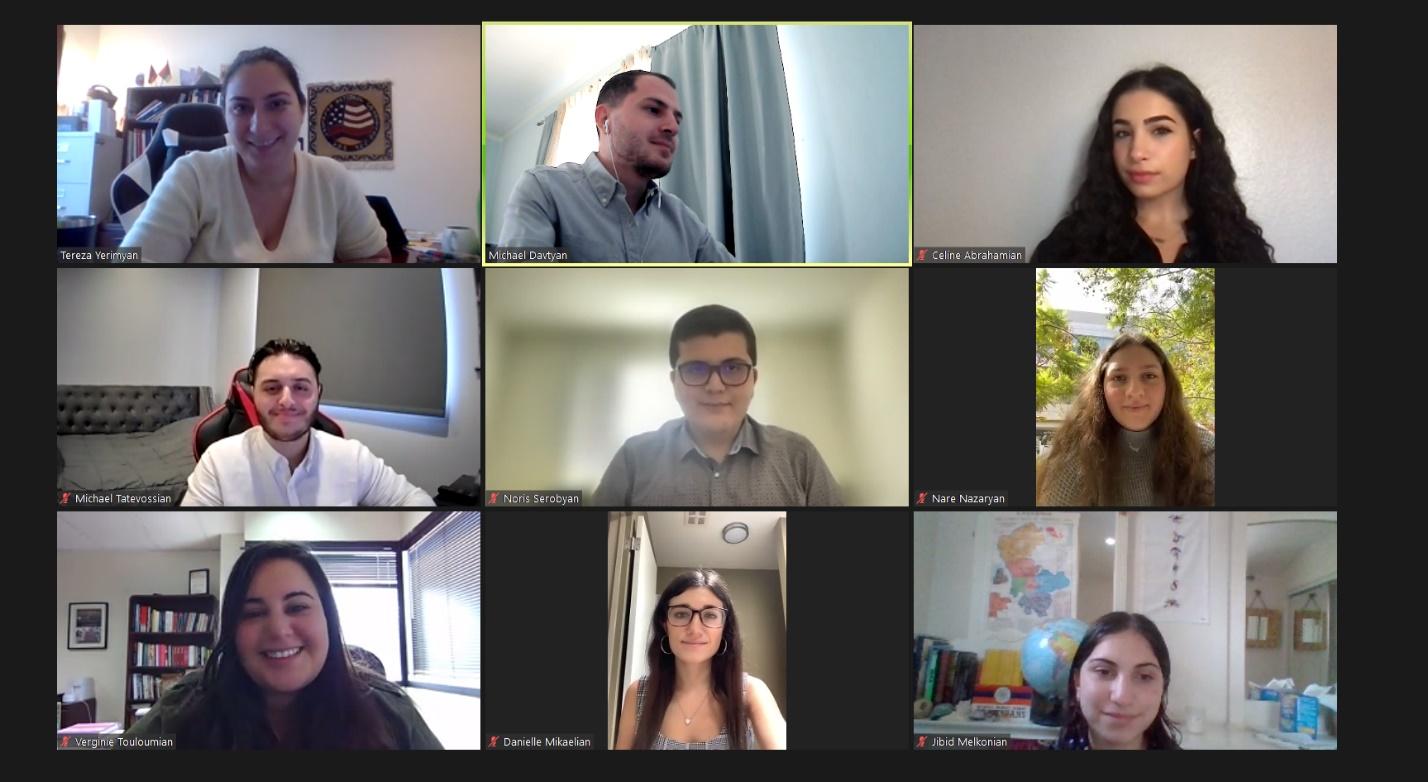 On September 24, interns met with Board Member and Treasurer of the ANCA Western Region, Hermineh Pakhanians, who lectured us on the Near East Relief Fund and their philanthropic efforts toward the Armenian people during the early 20th century. The organization began when Henry Morgenthau, after several attempts to convince Talaat Pasha to stop the extermination of Armenians, created a committee with his wealthy and influential friends in order to raise funds to assist the Armenian people. Through their efforts a total of $3 billion US dollars were raised, funds if which were not procured would have left many more Armenians dead. The Near East Relief Fund was one of the first US organizations to appeal to the American public and thus it created one of the first ever marketing campaigns in the country. Films, posters, and celebrities were used by the organization to spread its message. This led to an overwhelming response not only from America but the entire world. Near East Relief workers were also instrumental in taking care of Armenian orphans, particularly American missionaries who dedicated their entire lives to the cause. These orphans would grow up in time and move to the neighboring countries of Turkey that welcomed them. This particular lecture was very eye-opening for most of the interns as many of us had not even heard of the fund which was a key in keeping the Armenian nation alive. 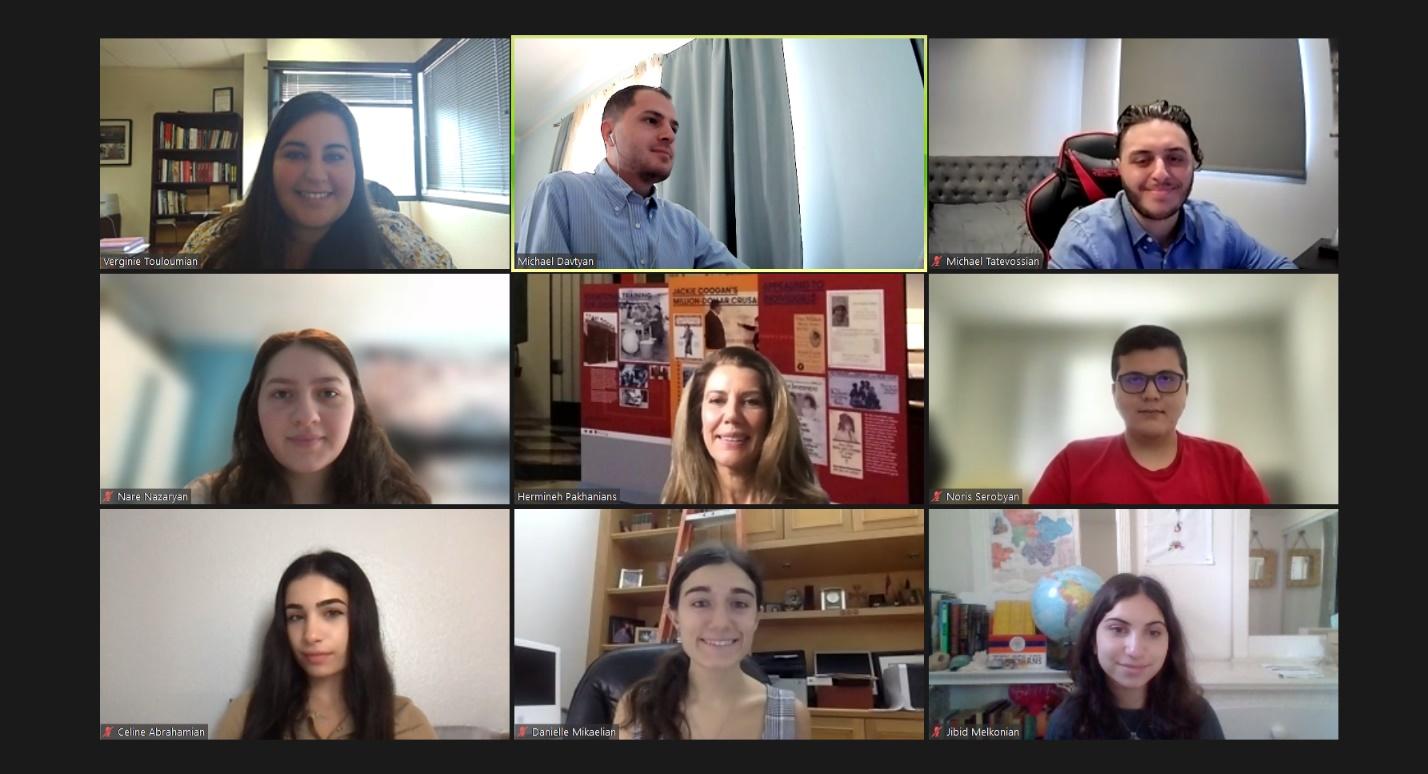 Ending our third week, interns met with Alina Sarkissian, co-chair of the ANCA Professional Network who gave us advice regarding how we should conduct ourselves during interviews. We were first taught to have a short “elevator” pitch which would be a quick introduction about ourselves and what our employers would like to know about us specifically. Interns were also told to have a few short stories on hand that would demonstrate skills and abilities that employers would find favorable. Finally, on interview day interns were advised on how to dress appropriately and to always arrive early. Punctuality is key with many employers. The presentation ended with a question-and-answer session where interns asked Tereza how to deal with issues they had to personally face during previous interviews. The advice given was something all the interns could use in their future careers.